The person I’d like to introduce is the artist Doug Holst. 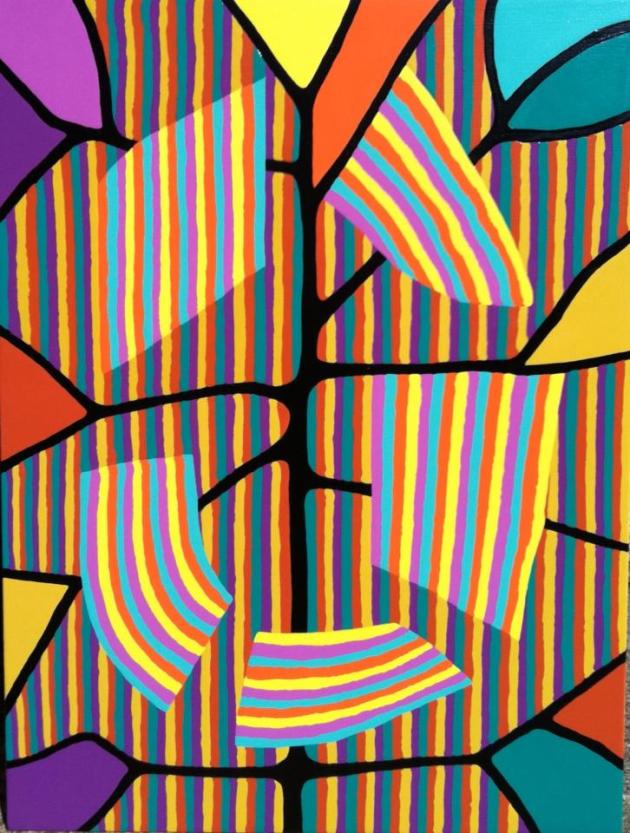 “As an artist I have often considered myself something of a latter day graduate of The School of Paris, a misfit born in the wrong place at the wrong time. As any wise student would I felt a certain love/hate attitude towards my Modernist mentors, complicated by the fact that I have never actually met Mondrian, Picasso or Matisse, and that my education was a rather unique correspondence course via dusty old art books, one hundred years too late. As a result it is entirely possible that I may have gotten a few things wrong.

I have been painting and exhibiting my work regularly since receiving my BFA in 1992, and the development of my work after college in many ways paralleled developments in Modernism in the 20th century. My interest in traditional realist painting as a student was followed by a period of several years when I was obsessed with Cubism. I made my first entirely abstract paintings in 1998 and I felt at the time as though I had been set free. In 2001 my need for structure led me to Geometric abstraction and to work based on systems, fractions and basic geometry. I bought a case of masking tape and made hundreds of paintings based on stripes and grids. For two years I did nothing but paintings using pentominoes, which are shapes consisting of five squares combined edge to edge. As my work developed I accumulated a long list of formal rules for myself which I felt my work should adhere to.

I moved to Albany in 2007 for graduate school with no clear agenda for myself and no idea where my work would take me. During my first year in the program I did nothing but works on paper. My intention at the time was to dismantle the long list of rules that I had adopted over the years and to decide for myself which ones I wanted to keep and which ones I might want to discard. These rules were the result of fifteen years worth of painting, and many hard won battles, so the process of reinventing myself in a school setting was a humbling and difficult one for me. A major breakthrough came at the end of my first year when I began to experiment with various acrylic paint mediums and techniques. After a period of trial and error I finally found a way of mixing paint to a fluid, glossy consistency which I felt was in tune with my intentions and temperament as an artist. By sidestepping the tradition of painting with paintbrushes, which I have always felt tend to get in the way when I am working, I was finally able to apply paint in a fluid, frontal way which did not deny the materiality of paint but managed to avoid the trappings of Abstract Expressionism and its obsession with gestural bravura and human emotions. The real question for me as an artist has never been what I wanted to paint but how I wanted to paint. By applying paint using needle-nosed plastic squeeze bottles I was able to carefully drip paint on my own terms, and to avoid any comparisons to Jack The Dripper. In order to generate some momentum for myself with these new techniques I set a goal for myself to complete 144 12 x 12 inch paintings on wood panels. I decided to spend no longer than two days at the most on any one painting in order to avoid getting bogged down in details. I embraced the absurdity of the project, so that it didn’t really matter to me whether or not I actually finished 144 paintings, the idea was to force myself to be inventive and creative on a daily basis. The entire project was an exercise in self deception, a device designed to simply keep myself moving and to avoid over thinking or overworking anything. As a result the project became an exciting clearinghouse of ideas for me, a freewheeling hit-or-miss workshop for formal ideas and techniques without the pressure of feeling as though I needed to concentrate on making “major” works. As such I think that the series has been a success, even though I only finished about 100 paintings, and the project is currently on hold. One interesting side note that developed during the making of the small paintings is that I accidentally became a landscape painter. As a formalist I am often confused by discussions of painting that focus on “content” or “subject matter”. I bristle at the notion of painting as “self expression”, and I personally have no interest in telling any stories or addressing any political or social issues in my work. As idiosyncratic as my take on Modernism may be, and in spite of the fact that I have read almost no art theory whatsoever, I believe firmly in the Modernist tenet that a work of art is not about something, a work of art, like a poem or a piece of music, simply is. I was therefore somewhat apprehensive about allowing landscape motifs into my work, but tree and plant forms have become so persistent in my drawings and paintings that I have finally decided to give myself over to the urge to draw them in order to see where it would take me. I have been especially inspired during this last year by Paul Klee’s work, especially his imaginary landscapes. I have reluctantly come to accept the possibility that I can allow landscape references into my work without becoming an illustrator, and that a certain amount of lyricism is not something that I need to deny. My goal for my third year in the program was to take the momentum that I had generated in the series of small paintings and to use that energy to make my first large canvases in years. I spent the bulk of my first semester on one large canvas, and although I was spending as much time in the studio as ever, I felt as though I had hit a wall. Techniques which felt free and fast on a small scale did not translate into the large paintings like I had hoped. Although I struggled through several large canvases I don’t feel as though any of them are nearly as successful as the better small paintings. I am therefore finishing my time in graduate school at a bit of a crossroads, which is not surprising. I am excited about the formal language that I have developed in my work during the last three years, though I am not sure what kind of work I will do next.” DH

Other material relating to Doug Holst.

If you liked this introduction maybe you’ll like the PREVIOUS and NEXT.

2 thoughts on “Have you met…Doug Holst?”