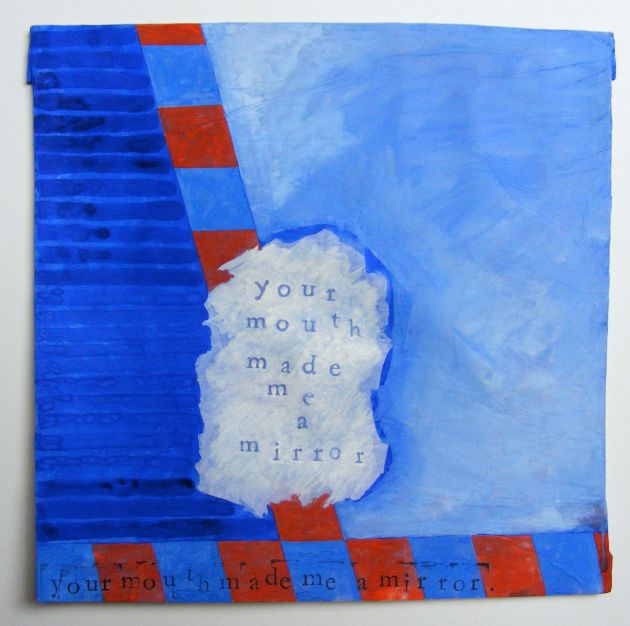 I’ve always been interested in the use of text in paintings, and the Long Series I’m working on has many examples that include notes and letters and type. But I’ve never had anyone other than my wife Jane Ledwell provide the text until now. This piece has a line that was provided by my friend Phillip J. Mellen. We have entered into a collaboration and at the moment he is working on some pieces that he will send to me to add my bits to.

The person I’d like to introduce is the artist Erin lawlor, and she was recommended to me by Ron Levin. 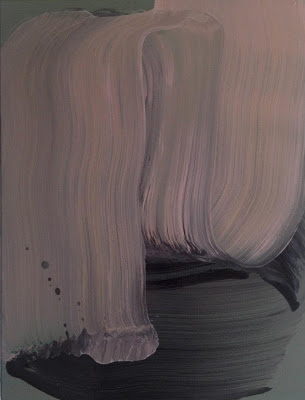 Extracts from an interview with Françoise Caille,

“After an initial periods of figurative work, over the last ten years I have progressively let go of a defined form or subject to concentrate on what was already no doubt the essential in my work, what is – for me – the small miracle of the way in which painting, in one stroke of the paintbrush and paint, can constitute all at once both space, volume, shape and time. Letting go of the explicit for the implicit. Or what Bachelard called, beyond images of form, direct forms of matter, whose form is internal. If the work is no longer actually figurative, there is something not unlike fractals, of the micro or macrocosm, deliberately imprecise, but certainly very far from any form of geometric abstraction, and in which the reference to the organic remains tangible.

(…) I often think of that phrase of Eliot’s4, ‘images that cling’, there is a notion of the residual, perhaps within the image itself, certainly through the process. And then again, it’s perhaps what continues still today to differentiate painting from photography, which, unless it resorts to narrative, remains the capturing of one precise moment. Painting is the sum of a whole suite of moments, that are intimately linked one to another, even entwined, of actions and gestures, decisions, that leave a trace, and remain sensitive in the final piece.
In a way it’s not dissimilar to David Bohm’s5 explanations of the implicate order, the idea of an ‘undivided wholeness in flowing movement’ without any sharp division, like the structures of vortices, a constant folding and unfolding of the matter. For that matter, for Bohm, time itself, the instant, is a projection6. Painting obviously remains, par excellence, a space of projection, for the practitioner, but also for the spectator, and one has to accept that, even if one obviously hopes that what is experienced doesn’t fall too far from the action in the studio.
Somebody recently described my work as «sudden death» painting, and I rather like that appellation. There is a technical truth in that – in the final instant, working in the wet as I do, it all comes together – or not, as the case may be. It’s ruthless. But I also like what that implies in terms of the capturing of something animate, of something eminently alive.” EL 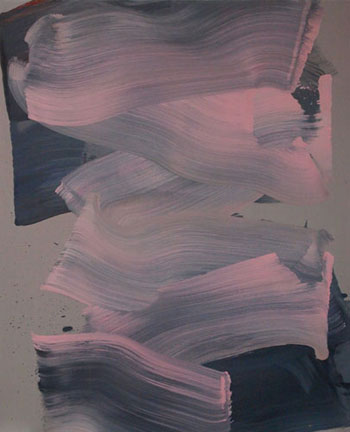 Erin Lawlor was born in Epping, England in 1969. She lives in London. 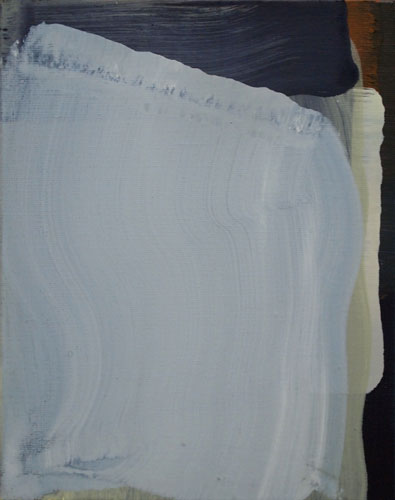 Other material relating to Erin Lawlor.

If you liked this introduction please check out the Previous and Next.